Signup by completing the form below to participate in this online event where Capt. Scholley will discuss her experiences as a Navy diver with a focus on TWA Flight 800*

* Trans World Airlines Flight 800 (TWA 800) was a Boeing 747-100 that exploded and crashed into the Atlantic near East Moriches, New York, on July 17, 1996 12 minutes after takeoff from John F. Kennedy International Airport on a scheduled international passenger flight to Rome. 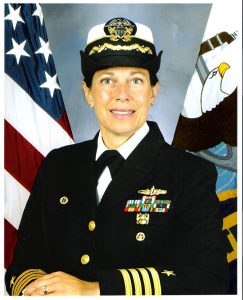 Bobbie served in the US Navy from 1981 to 2005. She is designated as Surface Warfare Officer, Special Operations Officer, Diving and Salvage Officer. She commanded USS Bolster (ARS 38), Mobile Diving and Salvage Unit TWO, and Naval Weapons Station, Earle, NJ. She was the fourth women to command a US Naval ship.

Bobbie was one of the senior diving leaders during the TWA Flight 800 salvage operation in 1996 and the USS Cole (DDG 67) recovery effort in Adan, Yemen in 2000. In 2001 and 2002, she led the USS Monitor salvage expeditions.

Today, Bobbie serves as a consult, routinely speaking in public. She and her husband are the very proud parents of amazing twin daughters who will graduate from high school this spring.

Your donation may be tax deductible; consult with a tax professional
Learn About Us